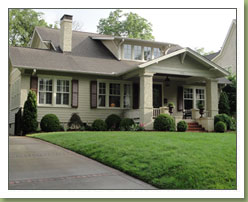 About Boxwoods
Boxwood, “Man’s Oldest Garden Ornament,” was introduced to North America from Europe in the mid-1600s and reached its peak popularity in the United States during the early 19th century and again during the Colonial Revival era. Horticultural interest in the genus Buxus is maintained today by many nurserymen, landscapers and homeowners.

While the most familiar forms are what are commonly referred to as “American” (Buxus sempervirens) and “English” (Buxus sempervirens ‘Suffruticosa’) boxwood, there are about 90 species and over 150 different cultivars known exhibiting a wide variety of forms and foliage. Several of the more unusual cultivars are now in commercial production.

Boxwood is considered to be a low-maintenance shrub, but certain practices are recommended to keep the plants healthy. The fall is the best time for boxwood planting and mulching, while the winter is the ideal time for pruning, thinning, and protection. Boxwood can be planted in the spring. Inspection of plants for insects should start in the early in the summer, during which time there should be attention to the watering needs of the plants during the first year after transplanting.

One of the most frequent questions we get is "How can I tell the difference between an American and an English boxwood?" There are a couple of differences in the growing habits of the two which make them easy to distinguish. The American boxwood grows faster, is usually a little less dense than the English which grows slower and doesn't reach the height of the American.

The leaves of the two are also shaped very differently. The leaves of an American are very pointed, much like a spear while the leaves of an English are much more rounded and oval shaped, and many times, but not always, have a small notch can be seen in the tip of the leaves.